History of the site and the building

In 1915 a hut was erected in Newdykes Road, Prestwick, as a church for soldiers stationed in the vicinity. The building was dedicated to St. Martin. After the troops left the district, worship continued at St. Martin’s and it was made an independent mission in 1926. Though discussions began with a view to erecting a new wooden building, these developed into a decision to erect a stone church which should be called St. Ninian’s.

The Bishop of Glasgow consecrated the new building in 1926. There is seating for 165. In recent years the congregation has experienced steady growth in numbers and a new ha 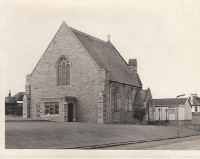 The legend of Bruce’s Well at Kingcase

Popular legend tells of how one day Robert I (1306-29), the King of Scots, tired from fighting and disease, came to that place known as Kingcase. Sticking his spear in the ground he sank wearily to the ground and fell asleep. He awoke to discover that fresh water had welled up through the sand. He drank from it and found himself much improved. He endowed the site as a hospital for up to eight Lepers known as a Lazar House.

The well (behind railings in photo) is lined with stone and was kept in good order right into the 20th century. The site was restored in 1912 as recorded on the brass plaque.

Most of the information we have about St Ninian comes from Saint Aelred (Ethelred) of Rievaulx (c.1110-1167AD), a Cistercian monk, and the Venerable Bede (673-735AD), an English scholar. St Ninian was born in Galloway and educated in Rome. He was made a Bishop by Pope St Siricus to preach the Catholic faith. Travelling back to Britain through France he stayed at the abbey of St Martin de Tours (c. 316 – 397AD) in Marmoutiers.

When St Ninian returned to Scotland he built the first church (c.397AD) in a whitewashed stone (most churches of this time were wooden). He named it Candida Casa (The White House) and in the language of that time it was known as Whithorn. St Ninian used this as his base and from it he and his monks evangelized the neighbouring Britons and the Picts. A Cathedral was built to house St Ninian’s remains and his church became a centre of pilgrimage. Today the Cathedral is in ruins, but pilgrimages are still made to Whithorn.

The Chapel of St. Ninian and The Graves

The excavations of 1912-13 uncovered the chapel and the present ruin has been incorporated into the modern wall as shown by tiles of red slate.

In 1824 at the East end of the Chapel the graves of former community members were to be seen. Some were removed in 1913 when excavations uncovered 24 bodies, and coffins were removed during the 1926 excavations. To understand why there was a separate graveyard it is necessary to know something of the history of leprosy in Britain.

The term ‘leprosy’ was applied much more generally in the past than is the case today. It could be a result of poor diet or lack of proper hygiene as well as the actual disease itself. Today leprosy (Hansen’s disease) can be cured. It is not as contagious as once thought. However, in the twelfth century leprosy was a terrible scourge and those smitten with it were isolated. In England alone there were 200 Lazar Houses. Pope Alexander III commanded that all lepers are debarred from worshipping in churches, and at their death they were not to be buried in churchyards but in a cemetery of their own.